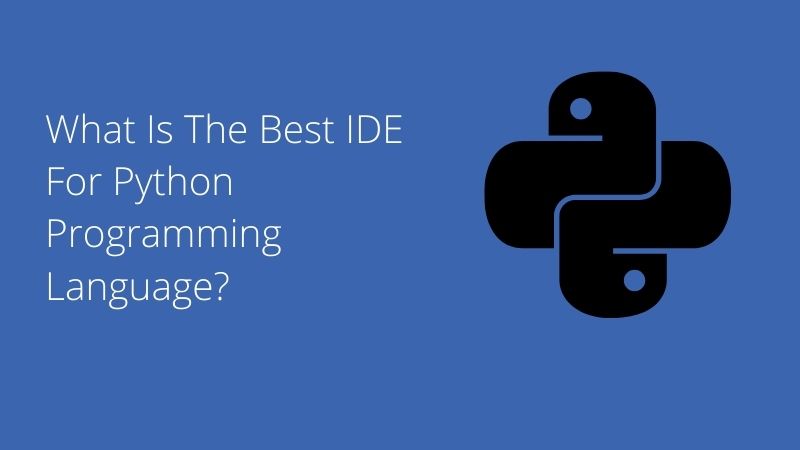 The best and most powerful IDE for Python helps manage your code development conveniently and easily. An integrated development environment (IDE) runs computer code written in a variety of languages. Moreover, due to Python’s growing popularity, having an IDE to execute is essential.

The growth of analytics and data has highlighted its applicability in a variety of computer and scientific applications. While extremely basic programs do not necessitate the use of specialized tools. Once passed that point, an IDE is necessary.

There are various types of IDEs, and some are better at supporting certain languages than others. Furthermore, some IDEs put limitations on how much code you can use. However they are frequently free to compensate, some paid-for IDEs provide far more flexibility.

What is Python IDEs?

Python IDEs can provide Python programmers with a collection of tools in a single environment. There are different Python packages for different features like syntax highlighting, auto-code completion, code color combinations, and easy navigation. These IDEs are useful to deal with application-specific platforms. Also, it is also necessary for removing the difficulties that arise during software development. The Python IDE helps in the creation of web pages, applications, and new software, among other things.

Why Do Programmers Require IDE For Python?

Regardless of the programming language you use for your projects, the IDE is critical to a seamless development process. When it comes to Python, it comes with some basic tools like a text editor to get you started.

But it won’t help you construct apps quickly. This is where the IDE program comes in handy. It also comes with several tools to help you improve your coding, troubleshooting, and testing skills. IDEs have advanced to the point that they can now simplify the way you write code. You don’t have to undertake all of the time-consuming and monotonous duties on your own.

There are a variety of IDEs for the Python language. Some IDEs are free to use so that you may get started with it as a novice. While some paid versions that are useful while working on bigger projects. The higher their intelligence, the less work you’ll have to do on the programming.

It is now present in 3 versions. The first one is a free Educational version, a free Apache-licensed Community version, and a paid Professional version (paid).

The acronym Vim stands for Vi IMproved. It’s a free open-source IDE for Python that comes pre-installed on Linux and macOS systems. It’s built around the Vi editor. It has a lot of customization options. Developers use it because of the keyboard shortcuts and great performance.

Non-programming applications are also supported. Command mode, Insert mode, and command-line mode are the three modes available in Vim. With only a few commands, you can effortlessly do complicated text-related activities.

It’s another one of the best and most popular open-source IDEs. It is useful by developers in an advanced scientific environment. The Anaconda package includes this tool, which is commonly necessary for data science tasks. With this IDE, you can quickly trace each line of your Python code.

Auto-completion of code, interaction with a large number of Python libraries, syntax highlighting, and many more functions are among the fundamental features.

IDLE refers to Integrated Development and Learning Environment. It is a text editor that comes with Python. It is a basic and easy-to-use Python editor that is ideal for newcomers.

This is a Microsoft-created free and open-source text editor that works on Windows, Linux, and macOS. It’s a little program with a lot of useful features like extensions, code completion, syntax highlighting, debugging, unit testing, and so on. It is extremely customizable, making it a user-friendly interface for developers.

Thonny is another powerful Python-based Integrated Development Environment. It comes with a lot of useful tools for learning Python programming. This integrated development environment (IDE) is great for studying and teaching Python.

It enables developers to observe how their Python variables affect by their code and shell commands. You can analyze your code with its rudimentary debugger. This uses the F5, F6, and F7 keys. Code completion, Syntax error highlighting, and step-by-step expression analysis is just a few of the fundamental features.

For writing and executing machine learning and data science code, Jupyter is one of the most extensively useful code editors. It includes code as well as rich text components such as links, equations, and so on. It works with a variety of programming languages.

Jupyter makes it simple to execute numerical computations. You can use it to run and modify code notebooks right in your browser. Moreover, adding breakpoints to your code helps you to simply move around the code.

Let’s Wrap It Up!

We covered the best 7 IDE for Python and why they are best in this blog. The IDE you choose is determined by a number of criteria. It includes the area in which you work (web development, Data Science, or scripting), the size of your team, the level of teamwork required, the size of your business, and your prior understanding of Python programming.

Each test editor has its unique set of features. Still, none of them are without limitations. For a better programming experience, it recommends getting expert help while selecting an editor.

So, these are the most widely recognized IDE for Python, which you may choose from depending on your requirements. For instance, if you’re new to Python development, Thonny is a good choice. If you’re more experienced, PyCharm is a good choice.