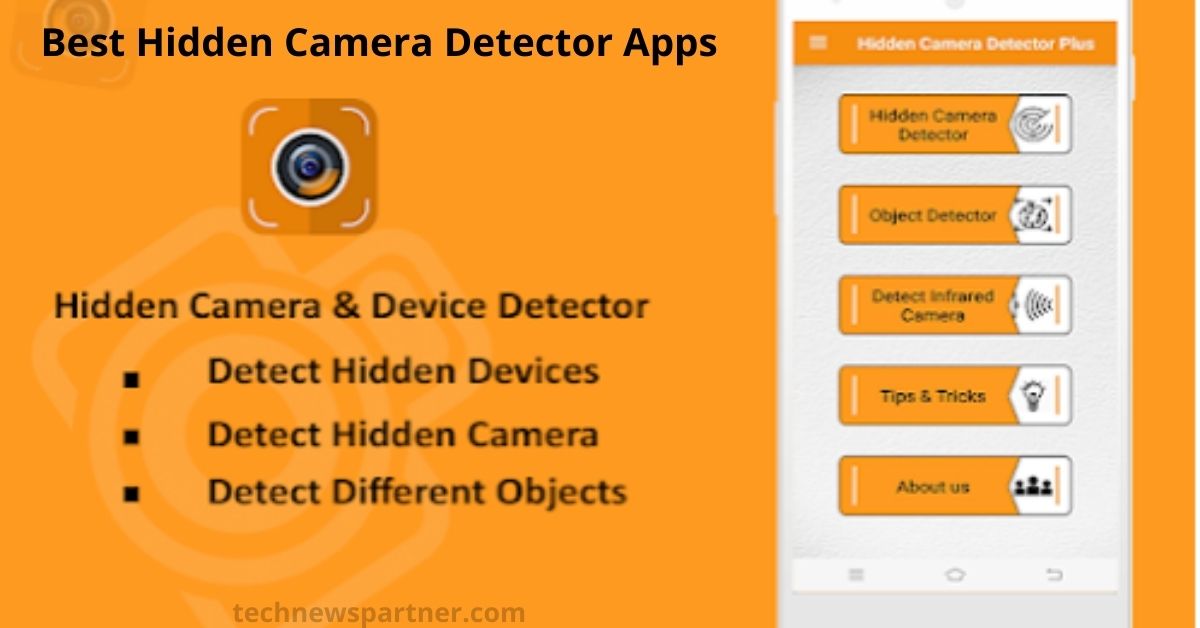 Do you ever have the feeling that concealed cameras are watching you? They are nearly invisible nowadays so that they can be installed anywhere: in a hotel room, a locker room, a swimming pool, and even your home. That doesn’t sound very good! But, for the time being, we want you to be free of your fear because we have something to tell you. This article focuses on contemporary Android and iOS apps that can identify hidden spy cameras.

Before starting let us know something. All recommended hidden Detector apps may not be suitable for everyone. Indeed. Some software includes an easy-to-navigate interface. while few apps are best to capture infrared radiation from hidden cameras. So apps are different and focus on certain features more than others. Check out all apps, their features, advantages, and reviews. It will help you to pick the best app as per your need

A real-time graph of magnetic activity with all cameras of this type is also available. The app alerts you to possible concealed cameras with a beep and a graphic red spot on the graph. The software can also detect cameras that are invisible to the naked eye, such as infrared cameras. Stay safe by downloading this app.

This program is also quite useful for those who want to keep their personal information private. Because cameras generate infrared radiation, which cannot be seen with the human eye, the app detects them. Download Hidden IR Camera Detector and run it. Open the app and approach the suspicious device with your phone.

It could be a hidden camera, a spy camera, or a secret camera if you notice a white light in a dark room that you can’t see with your naked eye. Because these hidden devices generate infrared radiation, the app analyses the magnetic field in the room using the magnetic sensor on your phone; use this software to ensure that no one is following you.

This is one of the most powerful applications for detecting concealed cameras since it uses cutting-edge technology to detect objects using magnetic waves. To find the camera, turn on the app’s search mode and go about the area where you believe it is concealed.

The app will beep if there is an electronic object nearby, and the arrow will show a high intensity of electromagnet waves. The larger the number displayed on the screen, the closer you are to the object.

Aside from that, you may utilize the camera mode to detect concealed cameras by staring at your screen with this software. The program will highlight the object once it has been found.

This program aids in detecting not only hidden cameras but also concealed microphones that may be present at the site. It operates similarly to the last program in that it detects magnetic waves and hence can tell you whether or not there is a spy camera or microphone present. The app is straightforward to use; you can launch it and turn on the detector right away. You’ll get tips and tactics on how to find concealed electronic objects, as well as the ability to ask professionals questions directly from the app.

The majority of the best hidden camera detector apps on this list are for Android devices, which is unfortunate. It’s most likely because not all of those apps work, and some of them are merely games. This one appears to be a serious camera detector with a built-in system for detecting electronic gadgets in the vicinity.

If there is something odd out there, it will analyze the magnetic field and send you a signal. The disadvantage of this software is that it can only detect hidden cameras using a magnetic field analyzer; there is no camera or anything else – hence, it is a fundamental program. However, the design of this single analyzer is outstanding, and the data is displayed on the graph quite correctly.

6. The Detector of Concealed Cameras: Finder of Hidden Devices

Any one of two techniques can be used to identify the spy camera in your home: meter detection or calibrator detection. In comparison to the previous detector, this one is more functional. You may also keep an eye on the graph of the electromagnetic field to see how close the hidden camera is getting. This software has a pleasant user interface that will be simple even for those with no prior knowledge of the subject.

For people who can’t get rid of the feeling of being unsafe, this is one of the most excellent concealed detection apps. Hidden Camera Detector has the most advanced tools for detecting hidden cameras in your environment. Its extremely exact measurements will allow users to locate all hidden cameras.

The problem is that these spy gadgets emit infrared radiations that individuals can’t see, but the app can. It will be your most potent weapon in the fight against espionage. If it’s dark, we recommend downloading one of the flashlight applications for greater visibility.

Do you feel as if your privacy has been violated? The most outstanding solution to your problem will be Hidden Camera Detector Pro. Based on your Android device’s magnetic sensor data, this spy camera detecting software analyses magnetic activity. Open and move your phone around all potentially dangerous objects.

The ability of this app to detect hidden microphones and even spy bugs may be considered its most significant advantage. But keep in mind that the app’s accuracy is dependent on the magnetic sensor in your device. The more the sensor detects, the better the result.

It’s unclear why anyone would want to pry into someone’s personal life, but it happens all the time. It’s okay if a serious investigation necessitates it. In any case, installing a spy camera at someone’s home is a risky proposition.

If you wish to keep secure from spy cameras and suspect that someone in your circle might do so, you can use this software to double-check. This is one of the most recent apps available.

It has a scanner that looks like a real spy camera. It scans the magnetic field for electronic gadgets on the graph. There are two options: scanner or finder, which functions as a standard camera with a spy camera/microphone detecting feature.

This app is less complicated than the others, but it is far more popular. This is probably because it has a more user-friendly user interface and simple algorithms for finding hidden cameras. It just scans the magnetic field and displays the signal strength. A covert camera scanner is also present.

If you’re not confident regarding the use of the app, check out the instructions in the main menu. A detector for infrared cameras is also included. In general, the app’s functionality is uncertain, as some users claim it does not operate.

Here’s a quick tip regarding all those hidden camera detection apps: most of them are dependent on your device. And this does not imply that you must have the most recent model of an incredible smartphone; on the contrary, older models may contain magnetic field sensors that allow you to locate other electrical items.

Also, don’t take spy camera finder applications too seriously – there’s no evidence that they function. If you believe there is a concealed camera in your personal space, the best solution is to contact the authorities. However, if that step is too serious for you, you may use best hidden camera detector apps instead, which are simple to use and has a humorous interface design.

Apart from the standard algorithms and processes in the program, such as magnetic field analyzers and scanner cams, there are extensive directions on where a hidden camera may be installed.

So above are the best Best Hidden Camera Detector Apps in the market. Remember, not all apps are suitable for everyone. Indeed, some applications include an easy user interface, and some features more than others. So before selecting your best hidden camera detector app, you should check all the features and benefits carefully.